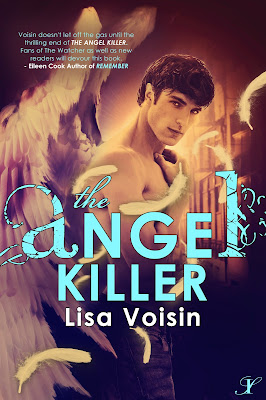 Summary from Goodreads:
Now that she’s found him again, all Mia Crawford wants is some downtime with her fallen angel boyfriend, Michael. But the call of duty keeps him away—from school and from her—with more demons to smite than ever.

When Michael is mortally wounded by a cursed sword, Mia must perform an ancient blood ritual to save him. But the spell exacts a price. Haunted by visions of war, torture, and despair, Mia discovers the world is in more danger than she ever imagined. Behind the scenes, an evil adversary pulls all the strings.

After redemption, there’s Hell to pay.

Light from the near-full moon shimmers off the leaves of sycamore trees, and the scent of pomegranate hangs in the air. Though my footfalls are silent on the hard-packed earth, Hell is never far away. Nor is that blood-stained rack that was my prison for millennia. The memory of my master’s claws still stings my throat; the poison of his hate burns below the skin. Perhaps it always will. The only reality I’ve come to know is that my pain satisfies him.
Anka sleeps on a grass mat, her lithe, young form curled into a fetal position on the roof of her family’s mud brick house. Strands of her long, black hair are stuck to her cheekbones from the heat. The girl is old enough to be married but will be taken to the temple of Seth in the morning instead. Rumors of her prophetic dreams have secured her place as an oracle. Such a gift interests my master too, and as influential as Seth is among the Egyptian people, he’s a false god, my master’s rival. A demon warlord just like him.
Her father snores deeply, but the stifling air makes her mother fitful. The woman twists and turns. Does she anticipate me? I stand over the girl and contemplate how to take her without waking them. Their terror alone would sound a call to all the scavengers along the Nile, and my master wants her soul intact. More power that way. In servitude or sacrifice, souls are the fuel that builds empires.
My hand hovers over her nose and mouth, and her soft breath tickles my skin. I could suffocate her while she dreams, a silent, seemingly natural death. Or I could carve out her heart, a symbolic gesture. He’d take pleasure in that. If I’m fast enough, she won’t have time to cry out or wake the others. I run my fingers over the middle of her chest and extend my claws.

First book in the series:

A Canadian-born author, Lisa Voisin spent her childhood daydreaming and making up stories, but it was her love of reading and writing in her teens that drew her to Young Adult fiction. In her spare time, she teaches meditation. So when she's not writing, you'll find her meditating or hiking in the mountains to counter the side effects of drinking too much coffee. She lives in Vancouver, B.C. with her fiance and their two cats.