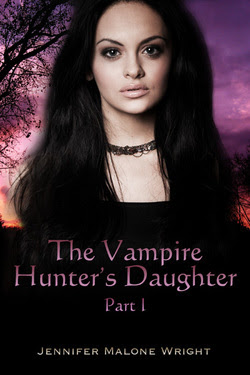 Fourteen-year-old Chloe witnesses her mother’s murder at the hands of a vampire. Before the vampire can kidnap her, there is an unexpected rescue by a group of vampire hunters. Overwhelmed by the feeling of safety, Chloe passes out and they whisk her away to their small community.
When Chloe wakes, she comes face to face with the only other living relative, besides her mother, whom she has ever met: her grandfather. Chloe’s mother kept her hidden from the family; now, Chloe tries to unveil the family secrets.
Through her grandfather, she learns her mother was a vampire hunter. In fact, her entire family is descended from the powerful bloodlines of vampire hunters. Chloe agrees to join the family she has never known for one reason only: Chloe vows to kill the vampire responsible for her mother’s murder.
With vengeance in her soul, Chloe is even more determined to follow through on her vow when she discovers the true identity of her enemy and how he is connected to her.
The Vampire Hunter's Daughter is the first in a series of short stories by Jennifer Malone Wright


Hmm....well....the summary was written well but sadly the execution of the story just felt sooo cliche. This was like a fan fiction or it felt like this was the first story she ever written (which wouldn't surprise me because this was published back in 2011) because it certainly reminded me closely to my very first cliche filled paranormal/fantasy story I written back then when Twilight was popular.

The story moves too fast to really get any depth or any connection to it. The character just goes along with it and just accepts it all. Again, this felt very cliche and I don't have much to say about it. I feel like there could be a great story here if it wasn't divided into multiple short stories and if some of the cliches were taken out.

Though this wasn't really to my liking, if it piques your interest it's FREE on Amazon and you should give it a shot. It's only 26 pages long.