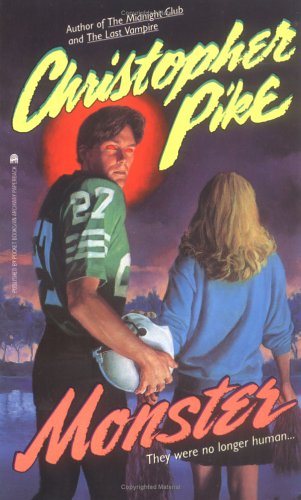 Mary Blanc walked into the party with a loaded shotgun. In the blink of an eye she blew two people away. She wanted to kill more, but was stopped by her best friend, Angela Warner, and the police. The next day, when Angela visits Mary at the jail she asks why she did it. Mary responds, "Because they were no longer human." Angela thinks she's crazy.At first.Until she probes deeper into Mary's claims and discovers a horror so unimaginable that she thinks she is going crazy. She even gets to the point where she wonders if she should have let Mary keep on killing. While there was still time to stop the thing from spreading. The very old thing. The hungry thing.


As the story developed and Mary was telling Angela her story on why she went in with guns blazing, I kind of got The Faculty feels from it. It reminded me of that movie a lot, especially when you find out it might be coming from the water supply (it definitely made me want to watch the movie haha). So I really enjoyed this, Monster hooked me from the very first page and held me till the end!

Mary is one tough chick, especially when she just acts and doesn't think while trying to stop her best friend in the beginning. Girls got some balls! Though she does have a weakness, her best friends ex-boyfriend. Which is how she gets into trouble, how their date was his chance to change her. Because she notices changes in herself, she realizes that Mary might not be crazy after all.

The story developed really well, I was constantly on my toes as Angela was digging deeper into the mystery! Though since there was some similarities to one of his other books called, The Grave, I just couldn't fall head over heels for it. But, I did truly enjoy it! The suspense at the end definitely had me sitting on the edge of my seat!