Review: A Shadow Darkly (Something Wicked #2) by L.E. Falcone 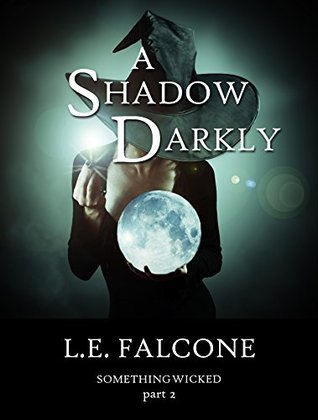 Even in the shadow of her friend's unsolved murder, Meg finds a spark of hope as an unexpected friendship blossoms into something more. With Midsummer fast approaching, life seems to be returning to normal, but Meg quickly learns that trusting normal can be deadly.

Okay, I'm going to try not to be harsh but it being a one star review, it'll no doubt feel like I am.

Literally nothing happens in this installment until the very end and even then, I was unsatisfied. Nothing new has come to light with who murdered their fellow witch and honestly I feel like the characters really don't care. Or maybe because of the time concept in this story makes it feel like they don't care? Or maybe because I feel like these 20-30 something characters are a bunch of naive teenagers. Seriously, some of the situations they get into, they act like a bunch of teenagers! Which is why it's hard to believe one of them just turned 39.

And the time concept, I feel like it's really hard to follow. I honestly don't know when things are happening and when like the last chapter is a month later then the previous chapter, I felt off kilter. It throw me for a loop, how has a month gone by already. What month is it? Seriously, it just doesn't flow right.

Since nothing and I mean, nothing was happening I was ready to quite. How sad is that when there's only six chapters. But I pushed through because there was only six chapters! I feel like the characters are very one dimensional and it's hard for me to believe that Meg has been a witch for 15 years- she feels like a beginner. And the witch concept of the story just doesn't feel strong enough. I just don't know, it just didn't feel well balanced and I felt like we got nowhere. Seriously, I don't know where this story is going.

Overall, I was disappointed. The end finally got some meat to it but with it ending on a cliffhanger, I just couldn't rate this any higher than a 1 star. Again, even the time concept at the end didn't make since. I would go into detail but I don't want to spoil anything. I'm just really glad I bought the bundle of this series when it was on sale. Will I continue? Doubt it.