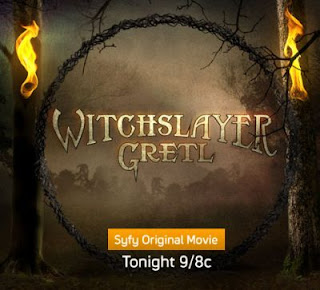 Twenty years after his encounter with the witch, a grown-up Hansel returns to the haunted forest, seeking revenge. But there's a surprise waiting - his sister Gretel (who he thought had been killed) is the witch's protégé.
Truthfully, it was nothing to what I was expecting. Now you may ask if that's a bad thing? And yes, it is.
I thought it was going to be in the modern world with the twist of the Hansel and Gretel in the story. Instead we were given a medieval time setting and what I think was horrible witchery.
Now, I don't mind that it was in medieval time, really I don't. This is where I just wish Syfy would have shown a better trailer for it instead of smashing it in with another movie they were premiering that same night. (which reminds me I need to watch that one too.)
Now that I got past the disappointment about the setting I waited to see how long it would take to hook me. It didn't. Yes, the acting was okay but really there wasn't anything exciting about it. Yes, the witch slayer had some really cool gadgets. He didn't really disappoint but pretty much everything else did.
Like the bad witches, the coven, he was going after. Really, they disappoint to the extreme. They're wielding around staffs, long wooden sticks with pointy metal spears. Really, really, really. And guess what.....they fought with them. They hardly, hardly used magic. The best they did with magic was a ball of light to hit someone in the chest with. Really, you're telling me these people are the baddest of the bad. Really. Nope, sorry, I just can't wrap my mind around that.
You're probably wondering why I wanted to watch this piece of s***, well, because of a certain actress. Why I like her, I don't know. Anyways, because of Shannen Doherty. You know, Pure, from Charmed. Yea, she really didn't shine either but then again they never really gave her the chance. For the first lot of the movie you really couldn't see her face.
Now, I could probably go on forever but I don't want to waste your time or mine so I'm just going to give you my rating for it now because I think I hit most of the spots I wanted to talk about, to forewarn any suckers out there just like me.
This is for people whom are die hard fans of Syfy. Because for anyone else this'll just drag on and on and on for you. I should know, my mind kept wandering off to different places while sitting watching this. Now that's a bad sign, right people?