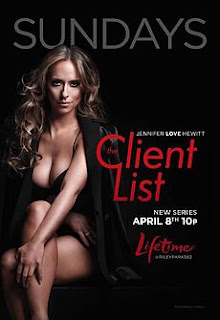 Based on the Lifetime made-for-television movie set in suburban Texas, the Client List answers the question of how far a wife would go to save her family from foreclosure. The Texas starlet, (Jennifer Love Hewitt reprising her role in the original movie.), reprises her role as Samantha Horton the beleaguered housewife of an injured football star with three kids, a mortgage, and an eidetic memory.

The former beauty queen now finds herself flat broke until she reads an advertisement for a massage salon and applies for the position only to find out that it is a front for a high end prostitution service. Initially repulsed, her dire circumstances lead her to accept. With her new position comes money, guilt and addiction. Her home life suffers as a result of her husband's lost pride and the long hours.

Eventually the police step in to close the ring. Ostracized from her family and community, Samantha has one more card to play. Using her perfect memory against her former clients, she compiles a list of influential men in positions of power to help a local mayor win her campaign & her own freedom


Truthfully, I enjoyed the movie but if you, The Creators, wanted a series then you should just do the series. Because, pretty much they are starting just where they started in the movie.
Jennifer's character, Sam, has to get a job because husband lost his job. Instead of showing the aftermath of where the movie left off, they are just showing us the same thing from within the movie. So if you haven't seen the movie then don't bother. Go straight to the TV series.
At first I was bugged that it was the same thing as the movie, however, there are a few changes in the story line and just the plian charm of the actors & actress that make you stay to watch. The southern accent Jennifer has is amazing and after it ended I had a slight southern accent, too. I don't know if that happens to anyone else but it does to me. Haha.
Anyways, it still bugs me that they just didn't do it a series first. They pretty much wasted money and time making the movie, so yea.
But the series is great. And the previews for up coming episodes look amazing and totally different than the movie. I love ever actor and actress that's a part of the show. The uncle is smoking hot, her boss is charming and fun, her mother is like any mother ones that try to push their daughters in a certain way, and her co workers are sweet and just other women trying to make a living.
If you have seen the movie then some things might bug you but the charm of everyone should hold you seated in place. And if you haven't seen the movie, then you'll just love the series.
A must see for people whom love lifetime.