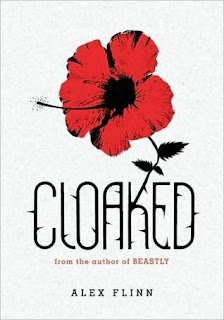 I’m not your average hero. I actually wasn’t your average anything. Just a poor guy working an after-school job at a South Beach shoe repair shop to help his mom make ends meet. But a little magic changed it all.

It all started with the curse. And the frognapping. And one hot-looking princess, who asked me to lead a rescue mission.

There wasn’t a fairy godmother or any of that. And even though I fell in love along the way, what happened to me is unlike any fairy tale I’ve ever heard. Before I knew it, I was spying with a flock of enchanted swans, talking (yes, talking!) to a fox named Todd, and nearly trampled by giants in the Everglades.

Don’t believe me? I didn’t believe it either. But you’ll see. Because I knew it all was true, the second I got CLOAKED.

So, this was an okay book for me. Most definitely not as good as her last two fairy tales I have read from her, Beastly and A kiss in Time, those were true swoon worthy fairy tales.
Now I read the authors note in the back of the book and I understand what she was doing with this book but wished she produced it better. What she was trying to do was shine light on some not so well known fairy tales. Which is fine. Actually very brave of an author to do. But the way she did it, it just didn't work for me.
Instead of the main character being apart of the fairytale, he was going on a quest for a princess, that landed him in helping the other fairy tales. And to tell you the truth, even when the fairy tales came into the picture, I didn't feel the magic. Yes, there was magic. I loved the magic cloak that could take you anywhere if you thought it. But the rest was kind of so-so. It wasn't very strong for us to see.
I just wish she took one of those not so known fairy tales and just wrote a whole book to it. That way we could feel the true magic that she felt when she read the original. Yes, this book pulled me in sometimes but then it would drag and honestly, I can't believe I finished it. Half the time I said I was going to stop because it just wasn't hitting the spot for me.
Plus, there were a few issues. 1.) slightly in the beginning the princess said this certain thing would mean yes but then the boy would say the same certain thing would mean no. Did she forget what she wrote in the first place? 2.) sometimes detail would be left out. Often I would have to go back and see if she explained on how he got in this certain place, but I never found it. So, sometimes I would get confused.
With all her other fairy tales there of course is a romance getting ready to form. Right off the bat I knew whom he would end up with. It was no brainier. However, it wasn't breath taking. I like to go weak at the knees and have a hope that they'll get together but....I didn't get that with this one. I did love this certain one part but that was it. None other. Which was sad because, like I said, I just loved her other two swoon worthy fairy tales.
Overall, this was just a blah book. If you want a real faint, heart pounding romance worthy with loads of magic read then you should check out Beastly & A Kiss in Time.
There were a few twist and turns in here that held me to finishing it but don't expect a whole lot. Also, throughtout this whole book I felt like this was a rush job. You know the seasonally type writers that have to get out a certain quota. My rating- 2 hearts.

So-So read.....borrow from the library

To see where this falls under in my 2012 challenges then click here.