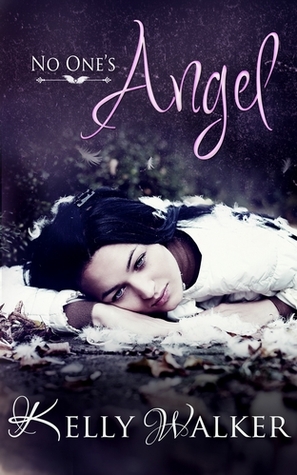 If you are looking for an intense, passionate love so wrong it is right, a story about losing your way but clawing desperately at any chance to find your way back, about hanging on to your last shred of sanity and trusting someone enough to let go of your fears, look no further. No One's Angel's angel is a New Adult (NA) Contemporary Romance about a girl learning to fight back and a boy learning to let go.

Tess used to spend more hours than she'd care to admit playing her favorite computer game, using the nickname Angel. She could pretend her life was different, and she could pretend Arion was just a friend. But a girl needs more to keep her warm at night than pixels, and she traded her virtual heaven for a real-life hell. Now she's on the run from a past she won't talk about, and the only place she has to go is the doorstep of the friend she's never actually met.

When Angel disappeared from their nightly games, it nearly destroyed Arion. He threw himself into work and women, but he can't help knowing the one-night stands will never compare to the angel who haunts his dreams. At first, when she shows up soaking wet and scared-shitless on his doorstep, he thinks his prayers have been answered.

But the more Arion tries to keep Angel close, the more her fear drives her away. If they are ever going to have a chance for a future, they'll first have to deal with the past that hasn't forgotten her any more than she's forgotten it--and Arion will have to learn how to let her go.
~My Thoughts~

I've been wanting to read this for a year now, ever since I helped reveal the cover, however after finally getting to it now I'm a bit disappointed.


Tess, aka Angel, is a very naïve character. She also has so many mix emotions that it's a bit tiring. I get that she's in denial about her abusive ex-boyfriend but she knows what's happened to her and which is why she finally ran away. I'm glad she ran away to someone that could help her but at the same time I was like "couldn't you have run to someone else?".
Axel, aka Arion, is someone she got to know over a game for a couple of years. She feel in love with him, and him the same, but she denied it because they lived far a part and she didn't see how it could work. It was all a fantasy in her eyes and that's what she told herself. Which is why she said yes to the first real boy that asked her out. But once she moved in with him, she learn who he really was. For a year of her life she let him control her, abuse her, and this is when she lost her friendship with Axel (Arion).
The lost of Angel killed Arion and sent him down a spiraling path. A path of one night stands and this has Tess questioning who he is when she gets to him. Throughout the beginning she questioned her choice of coming, but saying it was the only place she could go, yet at the same time she couldn't trust him because they haven't talked in over a year....what?
So, this made me question her as a character. If she couldn't or hasn't been able to find trust in him yet because they really don't know each other, how could she let him touch her that way in the dressing room? I know they were close in the past but after that traumatic year Tess went through, I don't get how she could easily let another man touch her. Again, I get she was in denial but her going back and forth got tiring and showed she was naïve, in the beginning it felt very fairy tale like because she didn't seem very traumatized by what happened to her. But I get she was in denial, I don't know anymore....
Which is why again I wish she went to someone else, someone that didn't want to turn her into their girlfriend, someone that would be patient and understanding. Not that I didn't like Arion, he was sweet but at the same time he was trying to make her love him when she should be getting help. I mean, he did help her, he was her hero but you know what I mean. Why are they trying to move into a relationship when she's trying to cope with just getting out of an abusive one. I mean, I get what the author was doing but sometimes there just wasn't enough balance or things were moving to fast. It didn't help that it took Tess forever to tell Axel what happened to her, if he knew right away he might not have always been thinking about having sex with this beautiful lady.
Overall it was an okay read, I did enjoy it but at the end it was just, meh. Nothing real special about this one. I just didn't like how fast they were moving sometimes but I guess Tess running away made her open her eyes but she could have done that with anyone. I mean, I know she ran to him because her ex wouldn't have found her there but still. I don't know, I've just got mix feelings about this myself. You might enjoy it, so check it out.
﻿

*was given to me by the author for an honest review*
Posted by Ashley at 1:00 PM