Tasha's Review: No Safety in Numbers 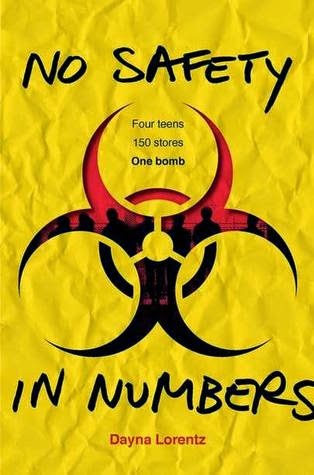 
A biological bomb has just been discovered in the air ducts of a busy suburban mall. At first nobody knows if it's even life threatening, but then the entire complex is quarantined, people start getting sick, supplies start running low, and there's no way out. Among the hundreds of trapped shoppers are four teens.


These four different narrators, each with their own stories, must cope in unique, surprising styles, changing in ways they wouldn't have predicted, trying to find solace, safety, and escape at a time when the adults are behaving badly.


This is a gripping look at people and how they can--and must--change under the most dire of circumstances.


And not always for the better.

The best thing about this book is the premise.  Hundreds, probably thousands, of people get stuck in a mall while the authorities are looking for who planted a biological bomb that is getting people sick. I think that is a great premise. I just don't think it was executed at as high as level as it could have been. The plot was slow and focused too much on the teenage stuff. I know the four main characters are teenagers but that doesn't mean that you have to pay attention to just that. I think the author missed an opportunity to take something very adult and serious and see it through a teenager's point of view.

I also found that I had a problem with believability with some of the plot points. One of the biggest ones is that it took so long for the people to start rioting. Maybe I'm just cynical, but I'm pretty sure people would be going crazy by the end of day one, if not sooner. There was a few other things that were probably nick picky. I know I might be a little hard on the book. If you don't think to hard and just have fun, it's a pretty good read.

After I got halfway through the book I realized that this was the first book in a series. I don't think there was a point to push this into more than one book. I actually feel that was a mistake as it feels like a lot was dragged out so there could be a second book. I don't even know if I will red it. I want to know what happens but don't really know if I want to read anymore of these books.

Overall, it's not a bad book. Once I shut my brain off, it was entertaining. I'm still figuring out if I want to continue with the series and I'm not sure if I would recommend it. But if you don't shutting your brain down for a little while, I say give it a shot.