{Book Blitz} A Different Side (University Park #4) by C.M. Doporto 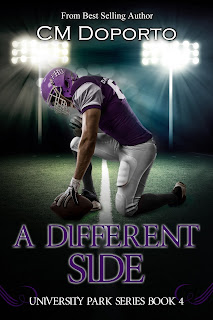 The highly anticipated story from the University Park Series.

Park Hill University’s star quarterback, Raven Davenport, has every woman dying to get caught in his trap, but he’s only interested in catching one girl – Lexi Thompson. But will he learn how to deal with his inner demons or will they continue to control him to the point of destroying what he loves most? Hear Raven and Lexy's story from a different side.


She was one-hundred percent correct. I didn’t know her, but something about her gutsy, no-nonsense attitude told me she wasn’t like the other girls. That made me want to know her more. Even though I liked easy, I was up for this challenge. And Lexi Thompson seemed like a good challenge. ~ The Raven

I lay in bed, unable to stop thinking about Lexi. She was totally invading my space and I liked it. I liked the way she bit her lower lip as her eyes appraised me. I liked the way her pouty lips called to me, begging me to devour them. I liked her sweet scent of peaches and honey that swirled around me. Shit, I liked it so much, but I’d be totally screwed if I messed this up. ~ The Raven

CM Doporto lives in the great state of Texas with her husband and son enjoying life with their extensive family along with their Chihuahua, Mexican Redhead Parrot, and several fish.

She earned her Bachelor’s Degree in Journalism from The University of Texas at Arlington. She briefly worked in the area of Public Relations and Advertising and then pursued a career in the field of Human Resources. CM considers herself a life-long learner and returned to school and earned her Master of Art’s Degree in Organizational Development from Dallas Baptist University.

She writes Young Adult and New Adult Sci-Fi/Urban Fantasy stories about ordinary women who do extraordinary things, become a heroine, and find love along the way.