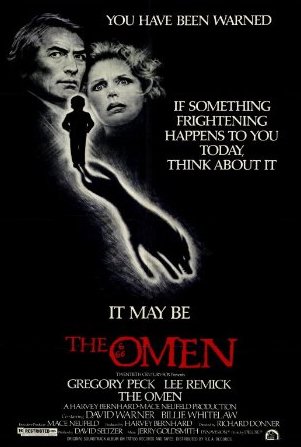 Robert and Katherine Thorn seem to have it all. They are happily married and he is the US Ambassador to Great Britain, but they want more than to have children. When Katharine has a stillborn child, Robert is approached by a priest at the hospital who suggests that they take a healthy newborn whose mother has just died in childbirth. Without telling his wife he agrees. After relocating to London, strange events - and the ominous warnings of a priest - lead him to believe that the child he took from that Italian hospital is evil incarnate.

Ever since Netflix posted this movie on there I've been meaning to get to it. It's a movie I've always wanted to see, it's a classic and now after finally watching it I can see why it is! It's absolutely spine chilling and I was sitting on the edge of my seat throughout!

Kicking things off, bringing goose bumps to my arms, was the scene of the nanny killing herself for the little boy. It set the tone for this creeptastic movie perfectly! After that I was drawn into the story and I couldn't believe how time flew by! I was so immersed in the story it didn't feel like two hours have past when we got to the end! The movie captivated me, never a dull moment as we got deeper into the story!

Honestly this movie had me looking over my shoulder or at least gave me that feeling as I was too afraid of what I might actually find behind me haha. I didn't know what I expected when hubby and I started watching it but what we got absolutely satisfied me! Now this was a horror movie!

The suspense was killing me, like I said I felt like there was always someone behind me! The kid, man they're supposed to be innocent but he was far from it and I loved that he didn't have to talk to truly preform the way he did. I think him barely having any lines is what helped with the creepy atmosphere. And his little smiles here and there when things were happening, yeah I shuddered a few times. In those moments I felt like he was looking into my soul through the TV screen.

Seriously, they nailed it on the head when it came to the creepy atmosphere and the actress that played the nanny that was there to protect the little boy, just from her face (no offense to the actress) I knew she was evil. Man, those scenes when they zoomed in on her face you just knew something was going to happened and again, goose bumps came to my flesh! There were even moments where I think I was holding my breath!

Overall what a brilliant movie! Even just typing out this review and having to think back on it, I feel like there is someone behind me. And after the movie ended I was a tad jumpy, my little dog got the best of me as I was afraid it was that rottweiler from the movie was coming to eat me. Hubby wasn't fazed by the movie like I was so he had fun laughing at me when I told him our little Alfred scared me haha.