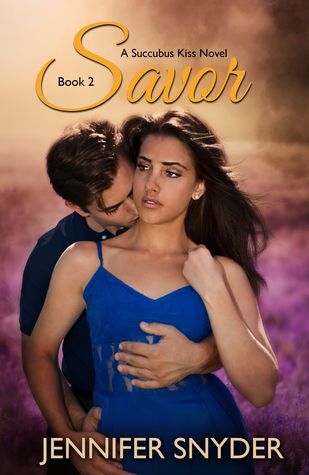 Succubus Kenna Blake has been infected by a wraith… The infection is just the beginning. As the wraith slowly gains control, Kenna must fight to keep a firm hold on her succubus nature, before she disappears completely. Following the only clue her mother has to offer, she tracks down the infamous Luke Bloom, owner of Love Potion #9, hoping for the answers she desperately needs. Unfortunately, Luke doesn’t harbor the magic that could rid her of the wraith and save Kenna’s soul…but his twin sister, Lexy does. The problem: Lexy Bloom relinquished her magic five years ago and went into hiding. As Kenna finds herself plagued by nightmares created by the wraith, she vows to do whatever necessary to rid herself of its darkness. Until she learns her only escape comes in the form of a rare spell requiring a shocking cost…


After reading Seduce I just had to get Savor to find out what was going to happen next for Kenna once she got infected with a wraith. In simple terms, a wraith is a really bad spirit that in a way "possesses" you to feed off your soul- it's how they continue to live. They're too evil to want to move on. So, I just had to read this one after that cliffhanger from the first book!

I'm really enjoying this series! In a way I feel like this series is very laid back but don't worry things are happening and I really enjoyed seeing new aspects of this world! But what I mean is that I feel like it's more real, like it's taking a natural path (hopefully y'all are getting the gist of what I mean haha). Like, yeah Kenna knows this is a time sensitive thing but she also knows she just can't drop everything so easily. So it was interesting watching her cope and learn how to deal with the wraith inside. To watch it grow in strength and not going to lie, sometimes this wraith brought chills to my spine.

It was interesting watching how the wraith was changing her, not physically but with how often she fed. Let's just say the wraith doesn't care if the people she feeds off of dies. This guy is pure evil....

Though there was a part of the story, like the middle or so, when a previous character comes to visit Kenna and I'm like, "'kay it's time for this story to move alone and she needs to go find that witch that can help her already". However once I got to the end I understood why the author kind of dragged it out a bit. That scene was very intense!

Overall this series is a blast to read! Again in this book I don't really feel there's much romance. I think the main reason is because she's macking on strangers when she feeds and not just Randal. But when they made love I think that was the first time where it felt like a true romance book. It was all about him and that made me feel a little more connected to them as a couple. So hopefully in the next book I'll be able to feel a stronger connection to them and that I can truly ship them. Excited to get to the next one! The twist ending in this one caught me off guard super hard so I need to see how it all turns out in the next one!